Romano Sims received his Master’s Degree in European Studies/International Economics from Johns Hopkins University.  Romano retired from the Army after 22 years of service and now resides in Tellico Village, Loudon, TN, with his wife Linda and will serve Smoky Mountain Service Dogs as Corporate Marketing Liaison.

Pat Chappell, received her Bachelor of Science Degree from the University of Illinois in Business Education and also holds an MBA Degree from Drake University. Pat retired from the John Deere Company where she held several senior management positions.

Steve Rieth received his B.S. in Accounting from Valparaiso University and his MBA from Xavier University. Prior to his retirement, Steve served as Chief Financial Officer of the Schoenling Brewing Company in Cincinnati, Ohio where he was directly responsible for all aspects of accounting, finance, information systems, human resources, and customer service. Steve also served on the Board of Directors and as Corporate Secretary. Steve currently lives in Loudon, TN. with his wife Diana.

A native of Maryville, Tennessee, Suzy currently resides in Tellico Village in Loudon. She is a Registered nurse and worked in various medical areas (surgical nursing, Manager of an Occupational Nursing program for a local hospital and a Sales Executive for a national orthopedic company). She retired after 20 yrs as a Radio Sales Executive. Her SMSD Board responsibilities include management of the SMSD Canine Training Staff and the Veteran Liaison duties assisting veterans through the application process to receive a service dog.

Laurie Birt brings an extensive skill set to the Board. As leader of the SMSD Community Events Team, and as one who handles our wonderful canines, Laurie has worked diligently to promote SMSD in many ways. Laurie will focus on Community Events, Education, Public Relations, Special Events and provide input on issues of strategic importance in regards to the mission of SMSD. In addition, Laurie is handler for the SMSD Canine Ambassador Hooligan.

Carla currently lives in Tellico Village with her husband Mark, where they have made their home since 2019. Carla has worked as an executive in the mortgage industry for the past 40 years, running several very large operations as well as being a founding member of a couple of startup companies where she performed a variety of roles, basically whatever was needed to get the fledgling business off the ground.

She has previously served on the board of the Simi Valley Education Foundation which raised funds to provide grants to local teachers for classroom projects that were no longer funded by the state. She has lived all over the US in the course of her career but opted to settle here in East TN for the beauty of both the surrounding landscape and the people who inhabit it. Carla was at once drawn to SMSD once she attended a Passing of the Leash in 2017. She has served in several roles since joining us in 2019, most recently co-raising a puppy, Bentley, with another local couple.

Carla’s father, grandfather, uncles, brother-in-law and nephews have all served in the US military so she feels that this is her opportunity to serve those who have given so much to safeguard our country.

Tom Bradley joins the SMSD Board of Directors just having retired from an air traffic control career with the USAF and Federal Aviation Administration. Tom followed the military service of his dad, an Army Air Corps WWII B-17 top turret gunner who got shot down on his last scheduled mission and evaded capture, and his oldest brother who served as a USAF Vietnam pilot. His oldest son is currently serving our country as an Air Force Intel Officer.
Leading into retirement, Tom knew he wanted to volunteer his time somewhere. Being a veteran and proud owner of 3 dogs, it took all of 4 minutes of a SMSD promo video to convince him his heart needed to be with SMSD.
Tom and his wife Diana relocated to Tellico Village after 35 years in the Washington DC metro area and look forward to assisting our wounded veterans and supporting the SMSD mission.

Board Member At Large

Joe currently resides in Tellico Village, Loudon, TN with his wife Marla. Joe is a graduate of the U.S. Military Academy at West Point, where he was commissioned a Lieutenant of Infantry. Over the past 26 years, he has led American Soldiers, Marines, Sailors, and Airmen on four continents. His command tours included: company commands in the 7th Infantry /Division, VII Corps in Stuttgart, Germany; battalion command in the III Corps, and a Joint Support Group Command at Guantanamo Bay Naval Base in Cuba. His culminating active-duty tour was at the Pentagon, where he served on The Joint Staff as a Division Chief on the Army Staff. On the Joint Staff, Colonel Tedesco was an International Staff Officer responsible for logistics coordination with all European, Middle Eastern, and African nations. On the Army Staff, he was responsible for the continual formulation of the logistics procurement and operational program of $18 Billion. Stationed at The Pentagon on 9/11/2001, his division was attacked and destroyed. On that day, Joe led a successful evacuation of his soldiers and civilian staff officers. After retirement from the military, in 2008, he was selected to be the Senior Mentor to the First Deputy Minister of Defense of Afghanistan. In retirement, Joe, along with his wife Marty are very active in their church and local community.
Colonel Tedesco holds a Bachelor’s Degree from West Point and a Master’s Degree in National Resource Strategy from the National Defense University. He is a graduate of the U.S. Marine Corps Staff College and the Industrial College of the Armed Forces. Among his commendations are the Distinguished Service Medal, the Legion of Merit, and the Afghan Medal of Bravery.

Steve currently resides in Tellico Village, Loudon, TN with his wife Joyce who is an Advanced Foster for SMSDogs in training. Steve received his Bachelors in Business from Northwood University and his Master’s Degree in Business from Central Michigan University. In addition, Steve served as an Instructor for Dale Carnegie Public Speaking. He is retired from General Motors Corporation as the Marketing and Product Director for Chevy Trucks and SUV’s. Steve’s strengths of public speaking, sales and marketing will greatly serve the interests and mission of SMSD.

Adri Blignault, Controller, joined Strategic Acquisitions Group (SAG) in 2021. Adri has extensive involvement in and exposure to multinational manufacturing and business operations in North America, Western Europe, Asia, and Africa. Adri was previously with the Flexider Group, where she held various operational and financial positions: Director of Operations, Director of Finance, Business Development Manager for manufactured products in Automotive, Aerospace, Oil & Gas Markets within established or startup facilities. Prior to that, Adri held various financial roles within manufacturing companies for the automotive market.

Adri received a Bachelor of Commerce Degree from the University of Port Elizabeth in South Africa, majoring in Accounting and Cost. During her career, Adri joined the South African government on various “Made in South Africa” marketing and branding missions in Europe, Asia, and North America and led a team that was named “Exporter of the Year” for medium-sized business based in South Africa by the Exporters Club.

Story and Illustrations by SMSD Volunteer Haylee S.
Available at Amazon.com and BarnesandNoble.com 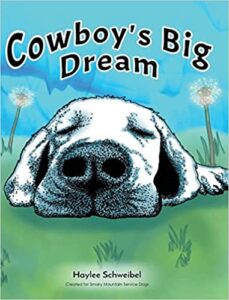 SMSD has been awarded Accreditation by Assistance Dogs International. This validates that the facilities and operation of the SMSD program meets or exceeds ADI standards.